Have you ever had a surprise on your water bill when your water usage went up?  The problem with starting or changing your irrigation system isn’t that you’re not expecting the amount to change… it’s that it takes 2 months before you know the effects of any changes.

The city reads your meter electronically around the 20th of each month, which covers the usage since the 20th of the month before.  But the water bill for that reading doesn’t get generated until the 21st of the following month.

So let’s say you bump up your irrigation system the last week of June.  The increased water usage will be read by the city on July 20th, and you won’t see it until you receive the bill in late August, usually the 23rd to the 26th – about 8 weeks after you made the change.

Here’s how to predict your water bill a month in advance — reading your own water meter when the city does!

How to Read Your Water Meter

First, set a reminder on your favorite calendar or reminder application to “Read Water Meter” on the 20th of every month.

Then, when the reminder goes off, go outside to your water meter, lift the cover gently and move it to the side.  You’ll note there are some wires going up from the actual meter to the cover… so don’t move it far.  Those wires run to a small antenna that sends the meter reading to the water utility truck that drives through your neighborhood on the meter reading day. 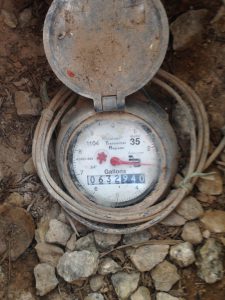 Inside, if you haven’t read your water meter in some time, you might have to wipe some dirt off of the actual water gauge. Take along a moist paper towel or a soft cloth, and wipe gently across the face of the dial.  You should see something like the picture.

You’ll see a set of 4 digits that are black-on-white, followed by 3 digits that are white-on-black.  The first four digits are the important ones: those represent “thousands of gallons of water used since the meter was installed.”  Here, it reads 632 (ignore the leading zeros).

Normally I’ll just take my cell phone and snap a quick picture, then carefully put the cover back on (remember to be careful of the wires underneath).

With that reading and my June water bill (the one I received Saturday June 24), I can predict my July water bill!  Remember that the bill includes water, sewer, and garbage fees, plus some other small fees and taxes.

How to calculate next month’s water charge…

From the “Current Billing Details” section of your water bill

On my bill there are three detail lines for the water.  Everyone with a 3/4 inch supply water meter (I’d think everyone in Rio Crossing and surrounding neighborhoods would have this size meter) currently gets charged $11.20 a month, just for being connected up to the water system.  (Technically, everyone gets a flat fee of $3.20 per water bill, and then $8.00 for the 3/4 inch meter connection.  If you have more than one meter connected, you’ll get multiple meter charges, but I doubt that will apply to Rio Crossing residents.  It does apply to the HOA, though, since we have multiple water meters all over the community.)

Since my most recent bill was for 7,000 gallons (see the Consumption column in the table) and my consumption for the July bill will the 8,000 gallons, I know my water bill will go up $1.83, plus a little bit perhaps in taxes.

Something else to consider…

It’s possible, of course, for your reading of the meter to not match the water bill, but it should only be off by 1,000 gallons – depending on what time you read the bill and what time the city read the bill.  Since they don’t read the white-on-black digits, it’s common for your water bill to vary a little every month or so, even if your actual consumption is pretty even.

If you really want to watch your water consumption more carefully, set a day of each week — Saturday or Sunday — then read your meter weekly, recording and observing changes.  If you do this, be sure to read all the digits of your meter (or of your picture of the meter, as I recommended).  Note that the last “units” digit on the meter does not move… it’s always zero!  But the large red needle points to the amount of water for the units position (number around the edge of the meter), and actually indicates a fairly precise amount of water at a tenth of a gallon (about a cup and a half!).  If you have water flowing when you’re looking at your meter, you’ll see the large red needle moving (slowly, hopefully) and the little red multi-point wheel to the left of it twirling around.

Want to know how much water your irrigation system uses every 10 minutes?  Make sure no water is being used (no showers, dishwashers, washing machines, etc.), read your meter (as accurately as you can, down to the tenth of a gallon), fire up your irrigation system for 10 minutes, and read your meter again.  The difference should be your irrigation water usage.  You can use the same approach to see how much water your other appliances use, etc., but it’s a little more difficult to stop everyone from using other water while you’re doing that!  Still, now you should have a pretty good idea how your water usage can be monitored.

And then there’s the sewer bill…

Something else to consider:  In July, your sewer fees will be recalculated.  On the June bill you should see this note:

So your sewer bill may go up or down, depending on how your “winter usage” for this past winter compared to your winter usage from the year before.

Do you think you have a leak somewhere?

If you call the city to come out to check for leaks and to see if your water meter is accurate, here’s what they’ll do: