The new entrance lighting has been installed!The new lights were installed in the last few days by Solar King, the same company that installed the solar lighting along the walking path and near the green belts.

The Solar King proposal for $1,740 was for two lights at each monument, as opposed to the three lights that were previously at each monument.  These new lights seem to be brighter and more focused on the Rio Crossing name, so two lights per monument looks pretty good at night.  I believe the monument lights are not solar powered, but connected into the electrical system located at each monument.

While approving the project at the July 2017 Board Meeting, the Board decided to wait until the summer annual flowers were removed and replaced with the fall flowers before proceeding with the light installation, and the new flowers went up in early December. 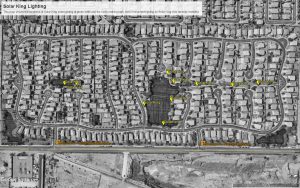 Replacing the lights at the entrance monuments has been a topic on the Board agenda since at least January 2017 — almost a year ago.  As you can tell, these things take time to iron out… but they do eventually get done!

The initial payment of $870 appeared on the Common Area Maintenance line item in November 2017.  The Solar King lights for the walkways and ramadas was also charged to this line item in May 2017, at a cost of $30,880.  The 2017 budget did not appropriate any money for these projects.